Working on the Xenovita RPG is like building a massive house from scratch. You start with a strong design, foundation, structure, and so on, making sure it can withstand the elements. By the time you get into interior decoration and small details, the house is built. Universe-building Xenovita is starts with the foundation. In this case, the galaxy itself. And how do you create a galaxy? You map it!

Mapping an entire galaxy is a daunting task, even if you are an experienced cartographer with the right tools. In approaching this task, we were aided by the meta-level structures we had developed for the universe, as they set the upper limits on what we had to map. Using some math theory, we knew from the outset that there are approximately 220,000 habitable worlds for humans within the Galaxy. 20,000 of those sit within the unnavigable Gravity-Shadow that bifurcates the galaxy and were not needed. Another 100,000 or so sat on the other side of that barrier and could remain an unknown quantity for later story and universe building. That still left 100,000 worlds to map. How do you map them? The key tool we use to map is ArcGIS Pro, a Geographic Information System (GIS) platform that is widely used across the world. GIS is used for mapping everything from roads to population change, fire recovery, or archaeological predictive models. ArcGIS is immensely powerful and many of its features are beyond what’s needed for mapping the Galaxy, however, it has some excellent features that make the task easy. First, as with every part of the reimagined Renegade Legion Universe, we wanted to make the map feel real. Many science fiction star maps are generalized things, or worse, it does not relate to the real universe in a meaningful way. To meet this challenge, we took our 100,000 habitable worlds as a baseline and worked out a way to tie that number to a real-world look for our game universe maps. 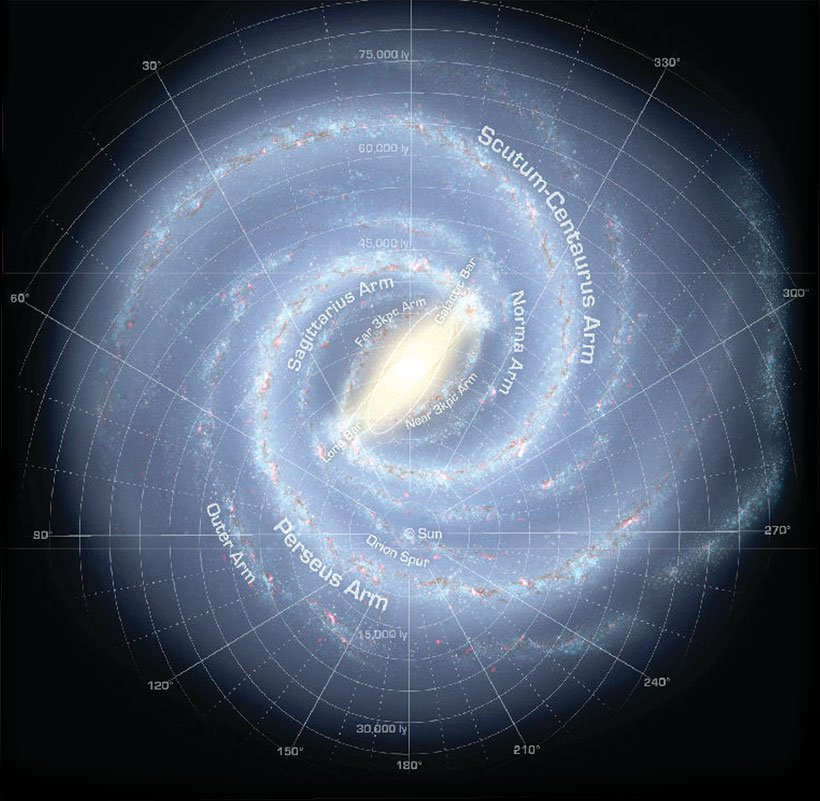 To make it work, we imported this map from NASA, which is a visual interpretation of the Milky Way Galaxy. In order to use the image map, it had to be georeferenced, which means pinning it to the earth’s surface. Georeferencing is necessary because ArcGIS Pro’s algorithms utilize the data to run their calculations. With georeferencing, the entire galaxy is attached to the earth to the south-east of Lismore in Australia. 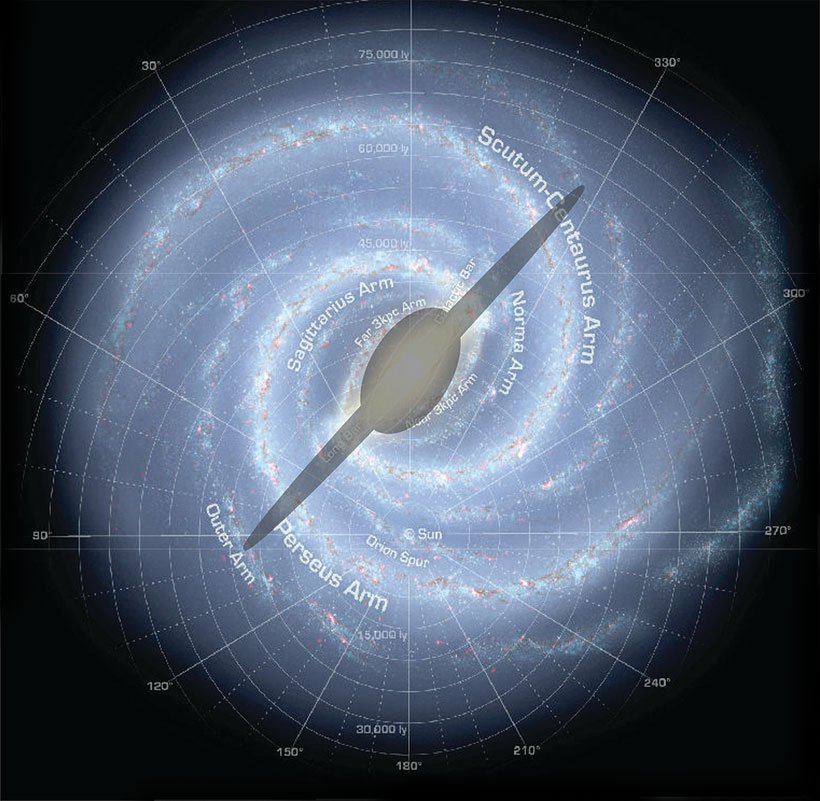 The next step was defining where we would be mapping, which is the lower right-hand half of the Galaxy, but first, we first drew the Hyper-Shadows that prevent travel from one side of the Galaxy to the other. (We’ll explain hyper-shadows in a future post, so stay tuned.) 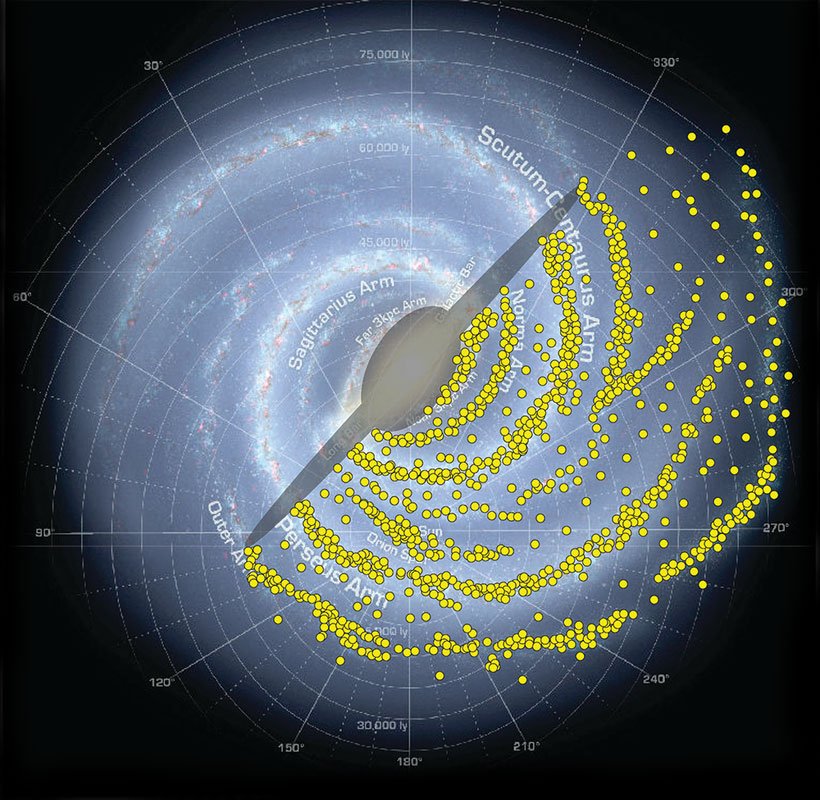 The next challenge was defining the concentration of systems across the half of the Galaxy we’re working in. Instead of trying to place 100,000 points manually, which would take a TON of time, only 1,000 were placed initially. By placing the first 1,000, we could concentrate these points along the arms of the galaxy where there were high concentrations of dust and gas in the star-forming regions. So, while we could have simply drawn a map shape and dropped 100,000 random points, it would not have looked real enough for us. Remember, we’re going for as much authenticity as possible with our stellar mechanics because they have a huge impact on the universe setting. 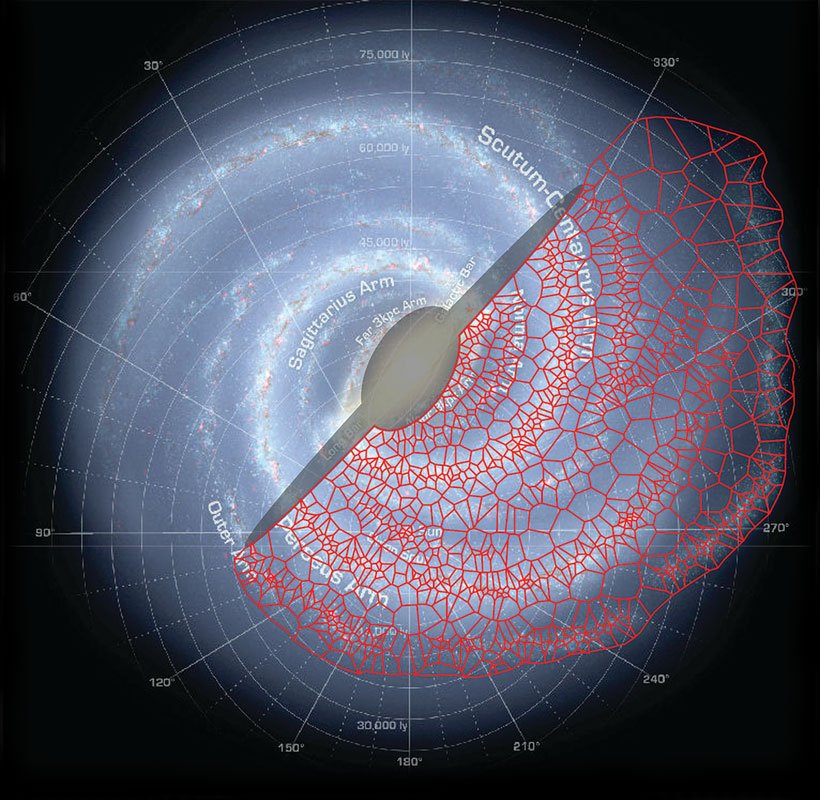 The next step was using the 1,000 points to create Thiessen Polygons. ArcGIS calculates the distance between each point and then creates a corresponding shape, which is the red polygons you see above. In the image, you’ll see that where there are more points, the created shapes are smaller, and between the spiral arms where there were fewer points, the shapes are larger. By creating the polygons, we can start conceptualizing regions in a 2D way and begin creating individual faction scale. Specifically, we want to see potential scales for the TOG against other galactic powers and to make sure everything fits with our meta-scale data. However, as you can see, this is pretty bland, and as a Cartographer, you want the map to come to life.

So, we continued to play with the map to see what would fit and what wouldn’t, eventually settling on something we loved. A key tool to figuring this out was adding the remaining 99,000 worlds, or points. We did this by creating random points within each Thiessen Polygon. For each polygon, 100 points were randomly placed within it. By using the polygons and ArcGIS, dropping the remaining points took sixty seconds and saved a lot of time.

This gave us our 100,000 systems, randomly created, but conforming to the structure of the Galaxy we designed. From there, the next task was to add colors and layout, which are all pretty easy with a structured galactic setup. We then took these maps and created our stellar geography, naming regions of the galaxy so that the Milky Way sprung to life. Most importantly, by using ArcGIS we could map each major historical epoch, which is great for story-boarding story events as well as detailing the fictional background of the game universe in a visage wall. Plus, all of the data is tied together so that it is consistently presented from beginning to end. We have a future post about mapping the TOG’s growth, however, we can show you what the Galaxy looked like in 3800. While this is well before our game-start time period, it’s a nice way to tease you with one of our favorite game-building tools.

Attached is the Renegade Legion universe in 3800. We hope you have plenty of questions after reading and seeing the map and hope you enjoyed learning about the mapping process! In a future post, we’ll show you how mapping can contribute to a living, evolving universe in a creative and interactive way using the latest technology, and how “real-time” mapping can greatly enhance everyone’s gameplay and storytelling.